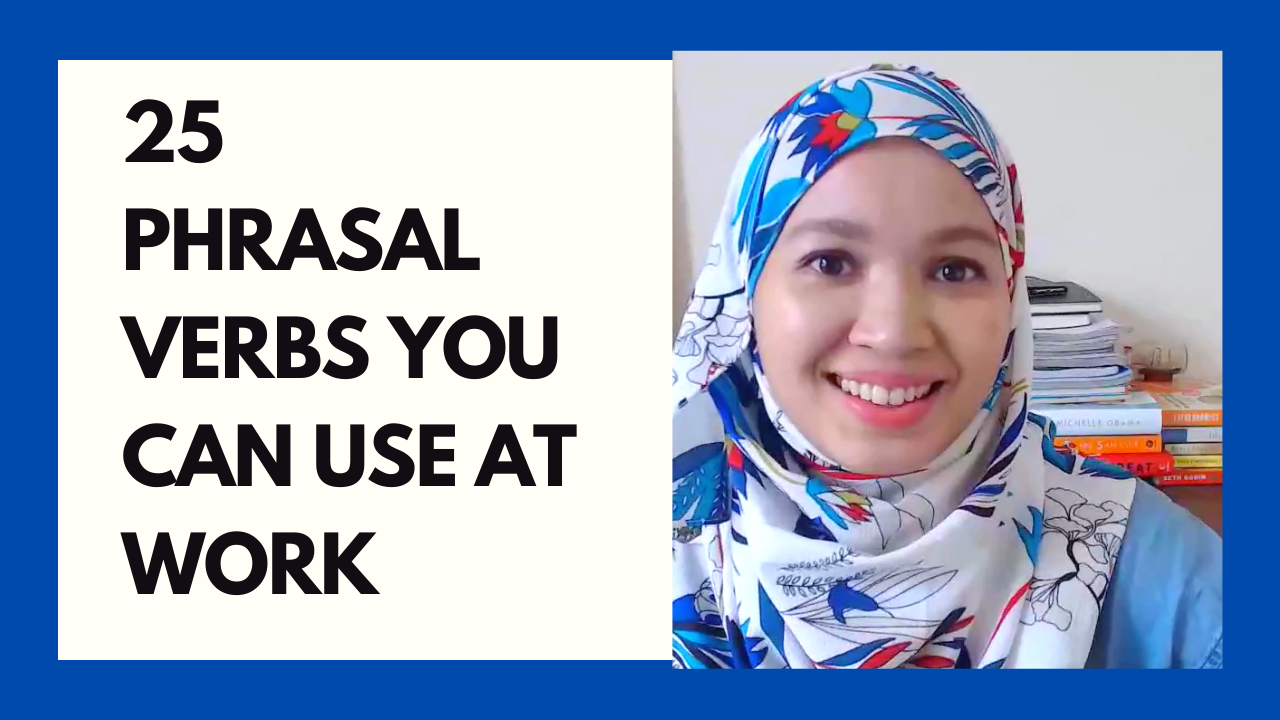 25 Phrasal Verbs You Can Use At Work

On Tuesday, I went live on our Facebook page to share 25 Phrasal Verbs You Can Use At Work. I shared one phrasal verb for every letter of the alphabet (except for one letter. I didn’t find any phrasal verbs beginning with the letter ‘x’!)

These are the phrasal verbs shared:

to follow a rule, decision, or instruction
They promised to abide by the rules of the contest.

to decide not to do something you agreed to do

I promised to help and I’m not backing out now.

back out of: We’re hoping that no one will back out of the deal.

to continue past a certain point

The meeting carried over into the afternoon because there was so much to talk about.

to choose someone or something from a number of possible choices

Thomas spent a long time looking at apartments around the area, but eventually decided on one near his work.

to start a new project or activity, usually one that will be difficult and will take time

After leaving college, Lucy embarked on an acting career.

to accept an unpleasant truth

Many people find it hard to face up to the fact that they are getting old.

to prepare yourself, or to prepare something for an activity or event

The shops are gearing up for the New Year sales.

I was late twice last week and my boss keeps harping on about it.

to deal successfully with a disagreement or problem, especially by removing the last remaining difficulties

They’re meeting in KL to iron out the final details of the contract.

to make something more lively, exciting, or interesting

The show was getting stale so they jazzed it up with some new scenes.

to start working hard, especially when you should have done so earlier

It’s time you knuckled down to some work.

I levelled with him about what happened that night.

There’s no coffee, so we’ll have to make do with tea.

to reduce the number of possibilities or choices

We’re working to narrow down the list of possible suspects.

(occur to someone) if a thought or idea occurs to you, you suddenly and unexpectedly start to think about it

The thought of giving up never occurred to me.

Didn’t it occur to you to help me when you saw how much trouble I was in?

Two students from each class pair up to produce a short play.

to stop working, associating or being friends with someone, especially when they need support

They quit on me just when things got rough.

to stop working or functioning

My phone has quit on me–can I borrow yours?

to talk or write about something for a long time in a way that is boring, annoying, or confusing

Quit rambling on–I’m tired of listening to you.

to make something smaller than originally planned

They had to scale back the project because of the costs.

We had to trade off space for the location when buying the apartment.

to make an activity or process begin

The talks ushered in a new era of international cooperation.

to leave somewhere safe or comfortable

If the storm has finished, we could venture forth.

She weighed in on their immigration policies.

I tried hard to resist, but in the end I yielded to temptation and ate it all.

The newspapers have zeroed in on his private life.

After learning these phrasal verbs, try to apply them in your daily conversations or at work. Keep listening and reading in English to learn even more phrasal verbs!