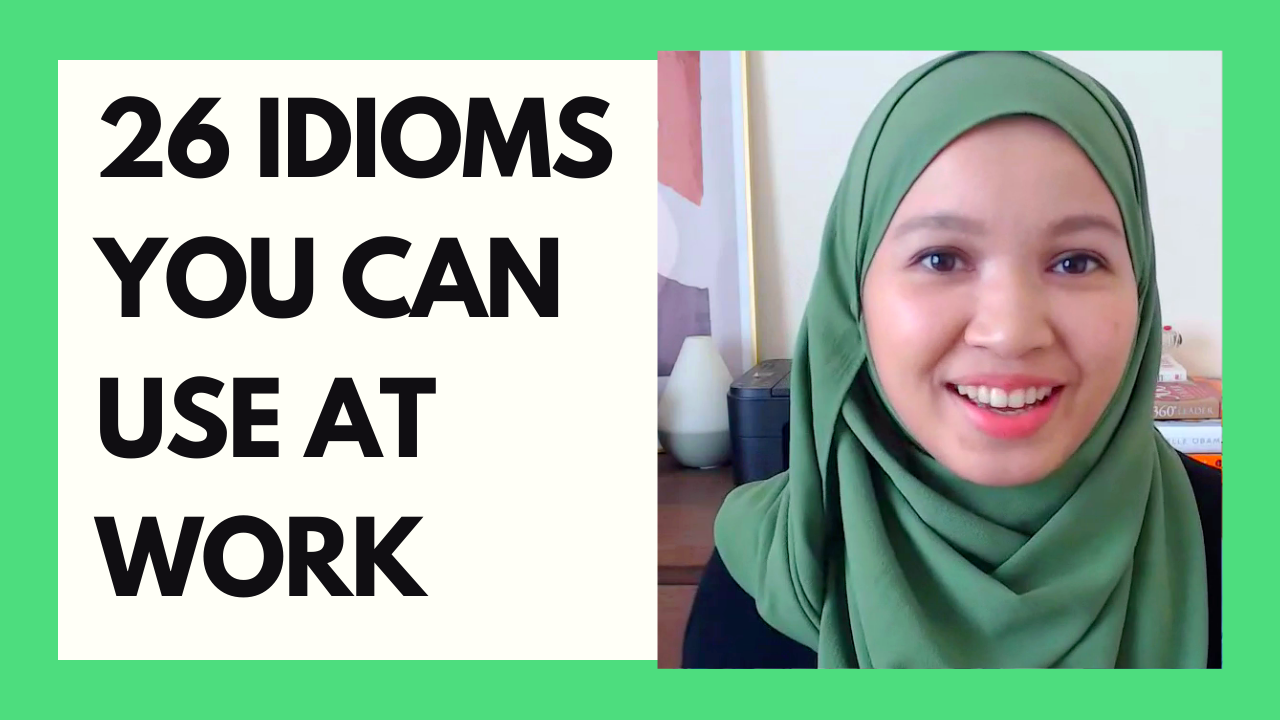 26 Idioms You Can Use At Work

In this Facebook Live session, Amnah shares 26 idioms that you can use at work! Watch the replay here.

These are the idioms shared in the session:

trying very hard to finish something before a particular time

Lina is working against the clock to meet the deadline.

to help two people, groups, or countries who have disagreed to have a more friendly relationship

She played a key role in building bridges between senior management and low-level managers.

to decide that you have finished doing something

After spending five hours on the report, Din was ready to call it a day.

to do what is needed in order to achieve something

Her remedy certainly did the trick.

5. every cloud has a silver lining

Though he had lost his job, he realised that every cloud has a silver lining, as now he could focus his attention on his side business.

to accept punishment or criticism for something you have done wrong

If you don’t complete the project on time, you will have to face the music when the boss asks for a status report.

to understand something, especially something that someone tells you indirectly

‘He can be difficult, if you know what I mean.’

8. have a lot on your plate

Being a single mother with three kids and a full-time job, she’s got a lot on her plate.

To put it in a nutshell, we lost the case.

used for telling someone that you understand an unpleasant situation they are in, because you are in the same situation

‘There is so much to do. I feel completely overwhelmed.’

to look after someone or something

Will you keep an eye on things here until I get back?

happening or working correctly, with no problems or delays

used for saying that something will certainly happen

It’s only a matter of time before he finds it now.

a nine-to-five job is a normal office job, in which you usually work from nine o’clock until five o’clock

She left her nine-to-five job to start her own business.

My engagement ring was handcrafted so it’s one of a kind.

something you wish for that can never really happen

His plan for starting his own business was just a pipe dream.

Investors will need to be patient and not expect any quick fixes.

With only two days before the competition, they find themselves in a race against time.

to be sold quickly and in large quantities

something very difficult that someone expects you to do

To score four goals in one game is a tall order, even for him.

They both work well under pressure.

The mayor is under pressure to resign.

to disappear completely in a way that is mysterious

The papers seem to have vanished into thin air.

We’re all walking on eggshells around her since her cat died.

a phrase to show the exact location

I showed her the tree and told her; ‘X marks the spot’.

You will have to accept defeat because this is a zero-sum game and I am going to win no matter what.