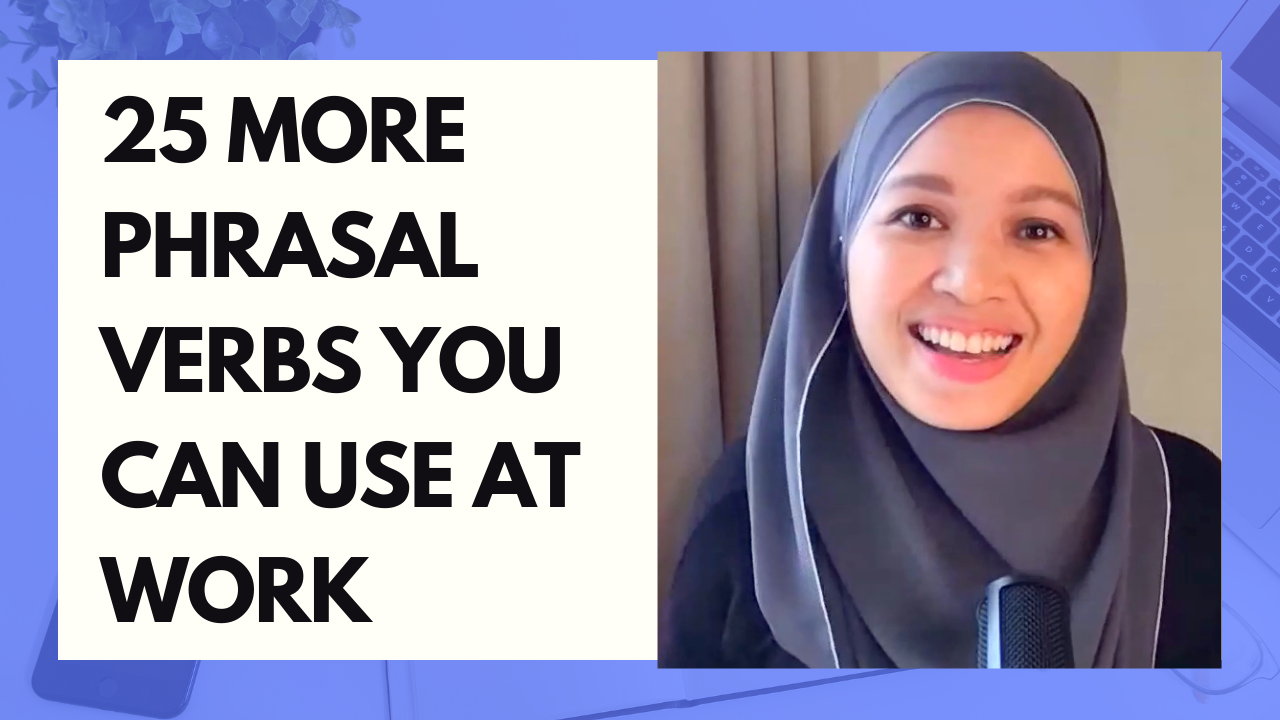 25 More Phrasal Verbs You Can Use At Work

In this Facebook Live session, Amnah shares 25 more phrasal verbs that you can use at work! Watch the replay here.

What are phrasal verbs?

When we use phrasal verbs, we use them like normal verbs in a sentence.

Here are the 25 phrasal verbs shared in the session:

to be the reason why something exists or happens

A number of factors account for the differences between the two scores.

The increase in carbon dioxide emissions may account for changes in the climate.

If you just bear with me for a few more minutes, we’ll have all the paperwork finished.

to be made of particular parts or things

Breakfast consisted of bread and a cup of coffee.

My role seemed to consist of standing and smiling at people.

to take action to do something, especially to solve a problem

The government must now deal with the problem of high unemployment.

I spent the morning dealing with my emails.

Keep on doing that and you’ll end up in serious trouble.

You’ll just end up with more problems to fix down the road.

to include a particular amount or factor when you calculate something

Total spending was virtually the same after factoring in inflation.

to ignore or avoid unpleasant facts

He could no longer gloss over his failures.

to deliberately delay doing something

He may decide to hold off for a few days.

She held off calling him until the last possible moment.

to become involved in (something, especially something that is considered wrong or improper)

Both candidates have promised not to indulge in further personal attacks for the remainder of the campaign.

to write something in a quick informal way

Carry a small notepad in your pocket and jot down your observations.

to begin, or to begin something

I’d like to kick off with a quick look at last month’s sales figures.

We are kicking off the event with a student performance.

to end someone’s employment, especially temporarily, because there is not enough work for them

They’ve had to cut back production and lay off workers.

(of a retailer) to add a certain amount to the cost of goods to cover overhead and profit.

She marks up prized garments by at least 50 per cent.

to definitely decide, arrange, or complete something

They’re on the verge of getting the agreement nailed down.

The firm opted out of the company car scheme last year.

If you opt out before December 1st, your deposit will be refunded.

to tell someone something

Thank you for pointing that out.

He pointed out that we had two hours of free time before dinner.

to wait for something in a queue. The usual American word is line up.

There was a long line of fans queueing up for tickets.

to increase, or to increase something such as a rate or level, especially the rate at which goods are produced

We’ve had to ramp up production to meet demand.

Injuries and illness forced the team to settle for third place.

Why settle for second best when you can have something better?

to consider a problem or decision carefully

Let’s think over his proposal before we see him again.

to use all of a supply of something

I’ve used up all my annual leave entitlement, and it’s only March.

to assert or confirm as a result of one’s own experience that something is true or accurately so described.

The explosive used is of my own formulation, and I can vouch for its efficiency.

to finally allow people to see something that has been hidden

This latest dig has yielded up over a hundred pieces of fine Roman silverware.

to focus on, examine closely

The moderator got the panelists to zoom in on the healthcare issue.